TEAM > Ministry Updates > Eight Meals Until They Get to Eat

When Zama was 17, she was orphaned and left to care for her four younger siblings. On the weekends she never knew where their meals would come from. Then she met Bonga.
Nov 21 2016
Browse archives for November 21, 2016

Bethany DuVal serves as TEAM's marketing manager and editor. She is passionate about helping others tell their stories, whether they're missionaries on the field, new believers or part of a missionary support team. When she's not writing, she enjoys reading books and hiking in the Smoky Mountains.

All posts from Bethany DuVal
0

The sickness that struck Zama’s parents might have been AIDS, or it could have been an ordinary illness. For Zama, the results were the same: By the time she was 17, she was head of her household, caretaker to four younger siblings and balancing high school concerns alongside the worry of where she would get her next meal.

The weekends were the worst. Zama’s school provided free lunches during the week, giving the children just enough strength to get through an evening and morning with no dinner or breakfast.

After Friday’s lunch, they were on their own. For the next eight meals.

Finding a job was impossible. With an unemployment rate of 25 percent, there was little available for adults, much less a 17-year-old high school student. Sometimes Zama’s neighbor helped out, but the woman was unemployed herself.

One of Zama’s siblings got a grant from the government, but as much as Zama stretched it, the grant was never enough to feed five children. Despite everyone’s best efforts, Zama was alone, carrying a weight no teenager should. Until a man named Bonga Mdluli came to her door.

Bonga made a simple offer: Come to church once a month, and the church will do all we can to provide food and school uniforms.

Zama’s neighbor was skeptical. The offer seemed too good to be true, and orphans are often easy targets for human traffickers. Still, it was an offer of food. Free, plentiful food.

The children decided to take the risk.

As a South African pastor, Bonga spent the 1990s watching AIDS attack his country and feeling helpless to fight back. But in 2008, he decided he had to do something, even if he wasn’t sure how it would happen.

A TEAM missionary offered his help, and together, Bonga and his small church started a food outreach for orphans, many of whom had lost their parents to AIDS.

For one visit to church a month, Bonga’s team will bring regular food packets to the children’s homes and welcome them to the church’s soup kitchen at any time. School uniforms are given at Christmastime, and the church offers AIDS awareness training, too.

However, for Bonga, the operation has always been about more than just providing for physical needs — or even getting kids into the church building. Bonga’s team is determined to “make them friends.”

“Instead of always coming to preach to them, sometimes we … just talk to them and say, ‘OK, how is in school? How are you doing? … Did you pass the last test?’” Bonga says.

As the friendships grow, orphans start to see Bonga’s team as parental figures they can trust, whether those figures are promising to bring food or pointing to Jesus as the source of all good things.

It wasn’t long before Zama, her siblings and their neighbor could see that Bonga and his team meant every word they said. The church members filled the children’s stomachs with good food, letting Zama and her siblings sleep well through each night and concentrate at school.

With the church’s help, Zama graduated from high school, and her siblings are on their way to doing the same.

Resources may get tight at times, but ultimately, God provides through the church, through local businesses and even through people abroad who give to the ministry through TEAM’s Wish List.

Bonga often tells the children, “Don’t thank us. Thank God, because God has touched our dear brothers and sisters overseas that they are helping people they don’t know, that they never saw in their life.”

As God shows his faithfulness through partners around the world, Bonga prays that the message of God as provider will sink into the heart of every child — that each of them will realize that in Christ, they never have to walk alone.

You can give food to Zama and orphans like her today! Find Bonga’s ministry in the Wish List now and show God’s faithfulness to an orphan in need. 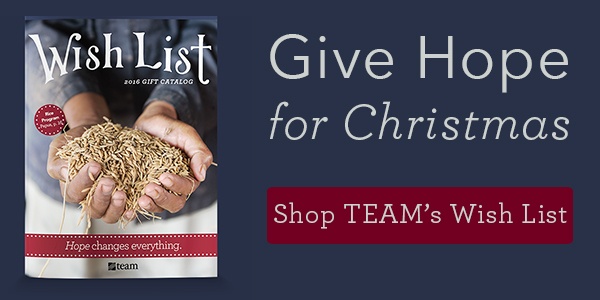 A GIFt For Everyone on Your List
Generosity Makes a Difference: Wish List Update
5 Reasons to Be a Missionary in Lesser-Known Lesot...
7 Last-Minute GIFts to Finish Your List

Bethany DuVal serves as TEAM's marketing manager and editor. She is passionate about helping others tell their stories, whether they're missionaries on the field, new believers or part of a missionary support team. When she's not writing, she enjoys reading books and hiking in the Smoky Mountains.

Stay inspired and informed with the latest missions articles sent straight to your inbox.